The grid-tie inverters serve to manage a photovoltaic installation that has connection to grid, where the energy consumed by the home can be generated by the photovoltaic panels or extracted from said grid, in addition they manage to send the surplus production (or not if you have injection 0).

By means of AC coupling configuration, grid-tie inverters can also be used in installations that use batteries together with an inverter-charger.

Hybrid inverters combine the function of battery inverters and grid-tie inverters. They allow in an installation that the system will be connected to the grid and that has three sources of energy obtaining: the one generated by the panels, the one obtained from the electrical grid or the one stored in the batteries, which is managed by a single device.

Microinversores BeOn Energy: available in 250W and 300W. Very easy and quick to install, they have interconnection cables and fast connectors to install up to 16 units per branch. They are very robust equipment prepared to work outdoors with IP68. 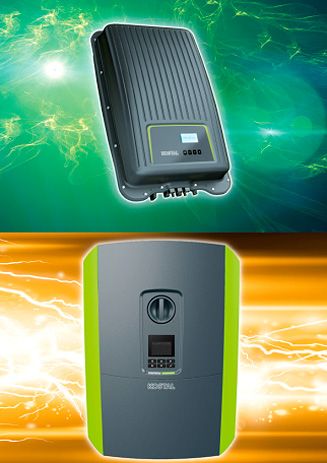 Grid-tie inverters Kostal. Its philosophy “Smart connections.” Means to combine the wishes of our customers with the specialized knowledge of the KOSTAL group. Thus, its photovoltaic inverters are constantly being perfected in accordance with the demands of the market. At present, both single-phase and three-phase photovoltaic inverters of the power classes from 1.5 to 36 kW, as well as a storage system, are part of our portfolio of PIKO inverters.

You can find out more about which cookies we are using or switch them off in settings.

This website uses cookies so that we can provide you with the best user experience possible. Cookie information is stored in your browser and performs functions such as recognising you when you return to our website and helping our team to understand which sections of the website you find most interesting and useful.

Strictly Necessary Cookie should be enabled at all times so that we can save your preferences for cookie settings.

If you disable this cookie, we will not be able to save your preferences. This means that every time you visit this website you will need to enable or disable cookies again.

This website uses Google Analytics to collect anonymous information such as the number of visitors to the site, and the most popular pages.

Please enable Strictly Necessary Cookies first so that we can save your preferences!